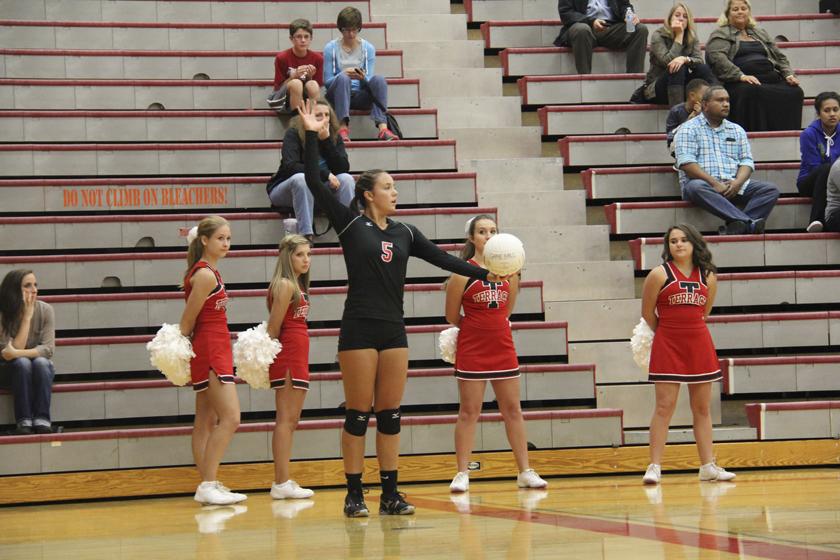 Senior Alisha Clingan prepares herself to serve the ball.

On Tuesday night, the Hawks hosted the Shorewood Thunderbirds in the Terraceum. The Hawks have been in a slump and that trend continued as they fell to the T-Birds, 1-3.

The Hawks have had a bevy of losses partially due to starting out the game slow, and this game followed that pattern. Just like their loss at Everett High School, they went down two game to none, both with a game score of 19-25, forcing the Hawks to fight an uphill battle for the rest of the game.

And also like the game at Everett High School, the Hawks came out with ferocity and determination to win the third game. They rallied together to avoid elimination and take it to a game four. They won the third game, 26-24.

“Our heads just weren’t in the game for the first couple of games.” Senior libero, Ali Hitchcock said, “We did what we did at Everett where we came out strong in the third game, but failed to carry the energy over into the next game.”

In the fourth game, the Hawks once again with their backs against the wall, looked to push it to a final game five. Despite their efforts, the Hawks just didn’t look quite sharp enough as they weren’t able to get to every loose ball, make every serve, and altogether complete the little things.

This marks the fifth straight loss for the Hawks giving them an in-conference record of 1-5, and an overall record of 1-7. This loss ranks them second to last in Wesco only above the winless Marysville-Getchell Chargers.

“I feel like this will be the turning point,” senior setter Andrea Cox said, “Five games is a lot. We’re done losing.”

“We’re passed the whole idea of not losing,” junior defensive-specialist Liya Ewing said. “The mindset in our heads right now is we’re going to win.”

The Hawks are now focused and set their sights on finishing the season strong.

Ali Hitchcock said, “Our goal now is to focus on certain aspects of greatness, and seeing what our full potential and reaching it.”

Their next match is at Arlington High School on Thursday, Oct. 9 at 7 p.m. where they will be facing off against the currently fifth ranked Eagles, and hope to get out of their slump and escape with a victory.