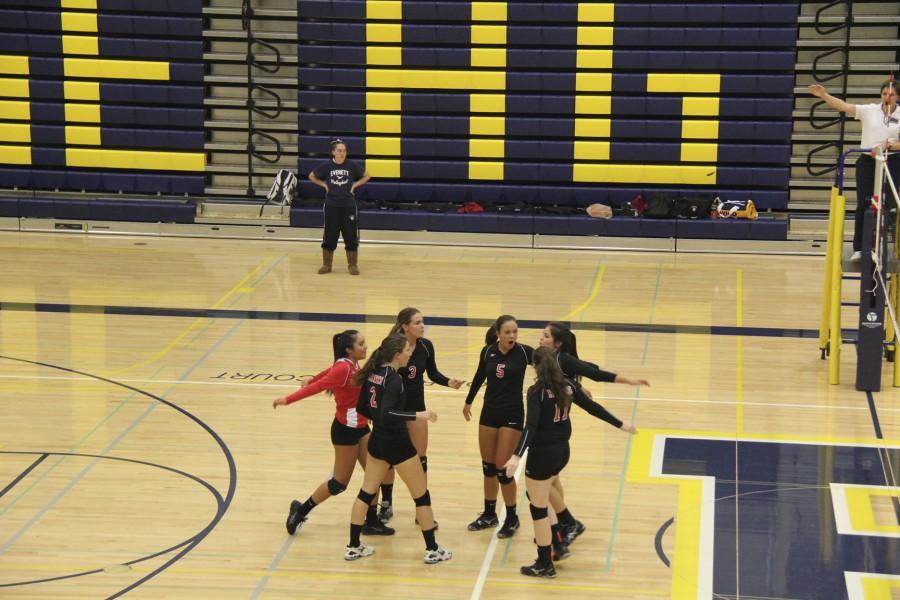 The Hawks gathering around to celebrate in a huddle after scoring on the previous play.

On Thursday night at Everett High School, the Hawks were visiting to battle the hungry Seagulls who were searching for their first win of the season. Despite the Hawks’ efforts, the Seagulls went on to win, 3-1.

The Hawks in the second game looked sharp in the early goings, but once again allowed the Seagulls to come back and take the lead late in the game, 19-18. The game then got heated as the Hawks bench and the referee officials started arguing. The referees went as far as to charge the Hawks a timeout for delay of game. The heated game ended with the Seagulls edging out the Hawks, 25-21, giving them a 2-0 lead over the Hawks.

It became an uphill battle for the Hawks.

“We didn’t start out the way we hoped to,” Senior co-captain and outside hitter, Alisha Clingan said. “We didn’t do everything we needed to do and didn’t focus on the little things.”

Senior libero-defensive specialist, Ali Hitchcock said, “For us, it’s hard to pick it up after not starting as strong as we can so going down 2-1, it made it hard for us to keep it up.”

Down but not out, the Hawks looked determined to make this a ball game. They came out strong and with lots of resiliency and tenacity as they were able to lead the whole way in game 3 before finally defeating the Seagulls in game 3. The Hawks hustled for almost every loose ball, and didn’t give up on any play. Despite all that, the Seagulls still had the lead at 2-1.

While all of this action played out on the court, players reported several incidents of the Everett High School student section harassing the Hawks’ players. “Overall, they were harassing all of us.” Liya Ewing, junior defensive specialist said. “They kept asking me for water and questioning why I wasn’t playing. To other players, they did questionable things like ask them to homecoming or to clean up water, rudely yelled nasty things at them, and also made rude gestures at them. Even after our coaches warned them, they still continued.”

The players, through all of the noise and reported inappropriate behavior that the student section of Everett High School exhibited, stayed together and tried their hardest to block it out and play the game. Ali Hitchcock said, “We have to learn how to block it out because there’s nothing we can do about it.

In a decisive game 4, the Hawks went to battle and started off with the same ferocity that they displayed in the last game. They were up midway through the game 14-10 forcing the Seagulls to take a timeout. They weren’t done yet however. They composed themselves and came out composed as ever and were able to launch a run giving them a 24-20 lead over the Hawks. The Hawks tried to go on a run as their last ditch effort but it was no avail. The Hawks lost the final game of the set, 25-21, and would go on to lose the match, 3-1.

The Hawks have now lost four straight games, but they still have high hopes for their season and look to bounce back for their next game. “We know we could’ve beaten every single team we played so it’s just a matter of finishing.” Alisha Clingan said, “I totally believe in this team.”

The Hawks play their next game at home against the Shorewood Thunderwoods at 7 p.m.