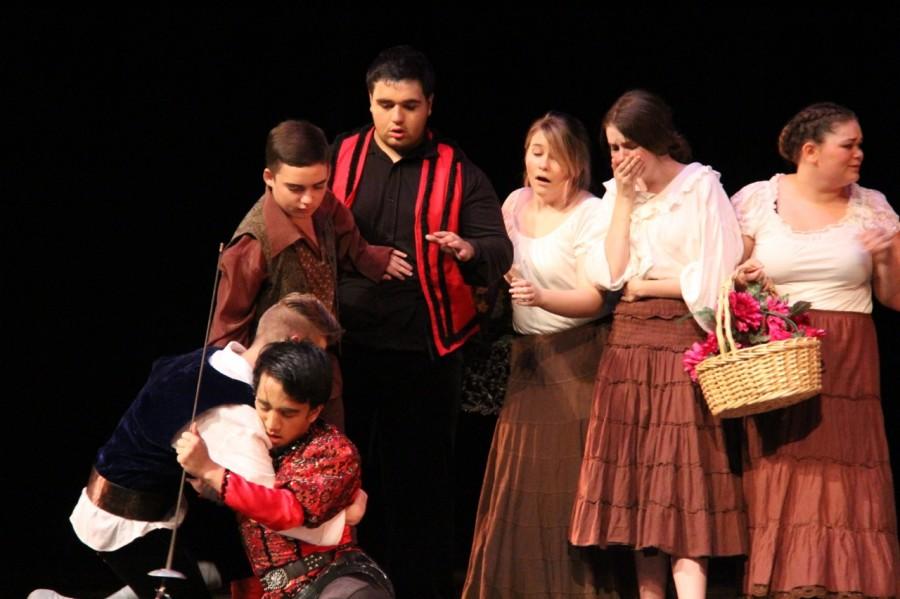 By Maxine Taylor and Max Tracy

The “Romeo and Juliet” movement workshop, presented by the Drama Department on Sep. 25 and 26 was not only a success, but a crowd pleaser as well.

The performers were more than happy with their efforts put in for the show and their fellow cast members’ ability to put on a good performance.

“It went, really well. I’m proud of all my cast members. They did amazing. I’m proud of myself, [but] there’s always room for improvement,” sophomore Everett Amundson, playing the role of Romeo, said.

The performances and the workshop were possible thanks to the Global Organization for Arts and Leadership (GOAL), who provided the workshop tuition free to MTHS students, while also putting all the proceeds from the ticket sales towards the benefit of the MTHS drama program.

The workshop was led and directed by Stanko Milov, a professional choreographer, stage director and the executive director of GOAL.

“I wanted to create an original production based on the abilities of the students; while challenging them by teaching them new skills in theatrical expression, communication, leadership, empowerment, etc.,” Milov said.

Milov has always been immersed in the arts and was glad to be leading a “Theatre-Movement” program such as this.

“My expectations of the workshop were met and I am very proud of all artistic and leadership successes achieved by the participants,” Milov said.

Considering the cast had a relatively short amount of time to prepare, the performance couldn’t have gone better.

Senior Emily Davidson, portraying Juliet agreed with Hirano on the time factor and was straightforward about it, “Only having two and a half weeks was a problem. There were some set backs, in every form of the word.”

The most difficult part of preparation was different for each cast member. Amundson said, “Just getting the timing of everything down. Of course it was a very rushed process; two and a half weeks, that’s usually done in about two months… we had a few technical difficulties trying to line everything up, but we did our best.”

Hirano on the other hand, found out there were other challenges, too.

“No talking or dialogue. We have to get all of our cues from music. So we really have to listen to the music,” Hirano said.

Although the cast was challenged, there was no hesitation as to whether they would like to do something like this again.

“Yes, I had a lot of fun. It was really fun preparing for this. I got to hang out with a lot of cool people, and do a lot of dancing, which is always fun,” Davidson said.

“Of course. It was amazing,” Hirano said.

The movement workshop was a huge success for all involved and many students stated that they achieved more than just skills used on the stage.

“The workshop has taught me not to give up or slack off at all and how to tell a story only through movement. It coached me to step out of my shell,” Cassie Stires, playing a guest dancer, said.

The theater department, now finished with “Romeo and Juliet,” is moving right along with preparation for “The Importance of Being Earnest,” and “Gypsy” coming soon.