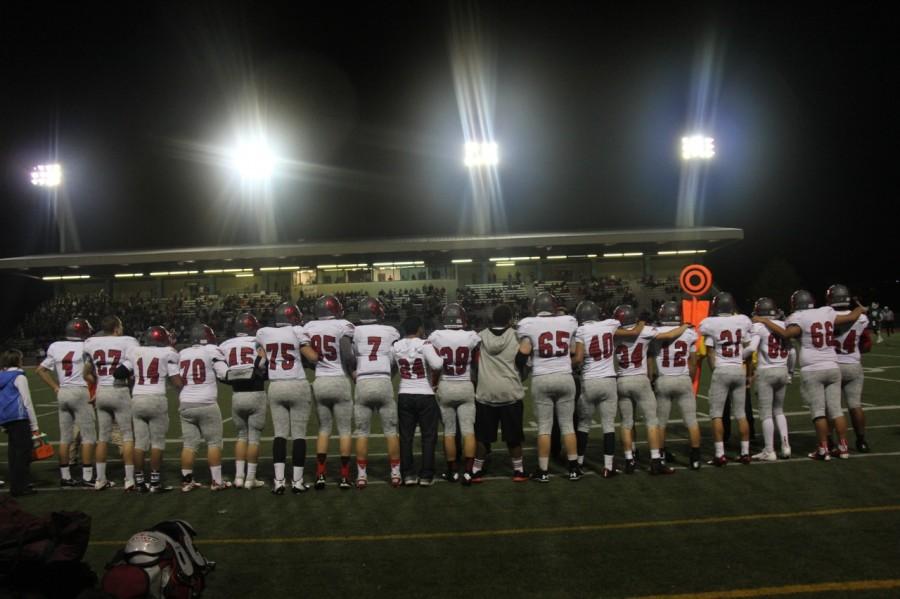 The Hawks under the friday night lights after scoring the game winning play against the Warriors.

The Hawks and the Edmonds Woodway HS Warriors played in an electrifying game on Friday at Edmonds Stadium where the Hawks were able to edge out the Warriors 35-28. The Hawks received their third win of the year advancing to a record of 3-1.

Going into this game, the Hawks were the obvious underdogs, but Hawks star running back and senior Ryan LaCasse had strong opinions against that.

“Everyone doubted us.” LaCasse said, “The whole week, we knew we had a chance because this is not the best Woodway team we’ve faced.”

The Hawks set the tone for the game as they came out playing with lots of energy and eventually capitalized on that energy with a touchdown. Running back, Ryan LaCasse showed the Warriors that they were in for a long night as he wreaked havoc on their defense. He had 36 yards rushing in the first drive alone.

Ryan LaCasse was crowned the Red Onion Player of the Game, and rightfully so. He finished the game with 14 rushes and 1 catch for 229 total yards amounting to 4 touchdowns including the game winning touchdown.

The Hawks’ defense also came to play. They were able to hold the Warriors’ offense to just 7 points in the first half as the Hawks led 14-7.

As the third quarter got underway, the Hawks were challenged with another bump in the road as Defensive Back, Jacob Wallgren got injured and had to leave the game. The Hawks stayed together and pushed through the adversity.

Quarterback, Justin Hopkins said, “It was tough, but we have a deep squad filled with good players this year.”

There’s a famous quote that says, “If it ain’t broke, don’t fix it.” That’s exactly the mentality that the Hawks had as they kept giving the ball to LaCasse. He was able to open the second half with a touchdown giving the Hawks the lead of 21-7.

The Warriors were down but definitely not out. They surged back into the game all thanks to their quarterback, Nick Morales, and their running back, Chantz Justice. They were able to tie up the game in the early goings of the fourth quarter, 21-21.

The Hawks then went back to what’s gotten them to where they were by giving the ball back to their dominant running back tandem of Ryan LaCasse, and Malcolm Johnson. The Warriors had success in heeding the Hawks drive down the field until Ryan LaCasse broke free and rushed for 47 yards. They carried that momentum forward and the Hawks were rewarded with a touchdown, giving them the lead of 28-21 with only 6 minutes left in the game

The Warriors answered back in the clutch moments of the game. They coordinated a balanced attack on the Hawks resulting in the quarterback, Morales, and wide-receiver, Jalen Nash connecting for 37 yard touchdown with only 2 minutes remaining.

It was all up to the Hawks to win this game. They were struggling up until Justin Hopkins was able to connect with Ryan LaCasse for a 67 yard touchdown reception which would eventually be the game winning play.

“This game was huge.” Senior quarterback Justin Hopkins said, “This was our ticket to the playoffs.”

Ryan LaCasse might’ve been player of the game but he was still humble in giving fellow teammate, Malcolm Johnson, the credit for his success. “If it wasn’t for [Johnson] with his fakes, the game wouldn’t have opened up for me.” LaCasse said, “Malcolm and I, we are the best 1-2 punch in Wesco.”

The Hawks will face off against the Shorecrest next Friday at 7 p.m. at Edmonds Stadium. The Hawks have won two games in a row and are looking to continue their hot streak.

CORRECTION: An earlier version of this story listed junior Riley Morrin as a wide receiver. He is actually a running back.