Volleyball: Spartans prove to be too much as Hawks lose at home 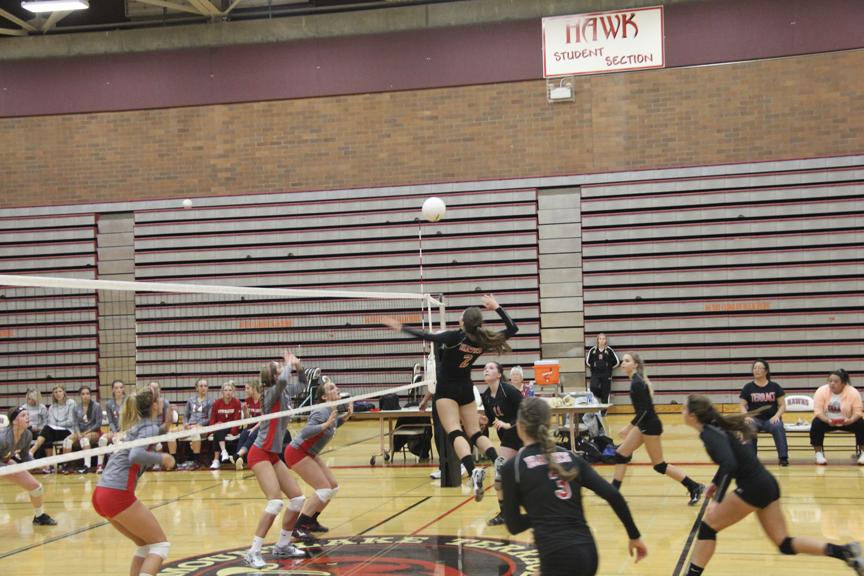 Senior Emily Eich goes up for a hard return during Wednesday's game.

The Hawks volleyball squad hosted the Stanwood Spartans in an intense showdown in the Terraceum on Wednesday. The Hawks were simply outmatched as the Spartans went on to get the “W”, 3-0.

After the first game, the Spartans didn’t look back. They went on cruise control and routed the Hawks in the second game, 25-13.

In the early goings of the third game, the Hawks simply looked gassed as they went down 3-13. The Hawks started playing with desperation as the team started making all the right plays and showed outstanding hustle. They were led by senior libero-defensive specialist, Ali Hitchcock, who on multiple occasions found herself on the ground after preventing the Spartans from scoring. Despite all the momentum, the Spartans beat the Hawks, 25-21 and swept the match, 3-0.

[ Senior outside hitter and co-captain Nicki Bouche after the game said, “We’ll have a great run, but then we’ll make one mistake and get frustrated, and start losing. That’s definitely something we’re going to work on.”

Bouche said, “As a team, we need to mesh a little more, trust each other, and overall play more as a team.”

The Hawks, now 1-3 (1-1 in conference), go back on the road next Tuesday as they will be facing off at Marysville-Pilchuck against the Tomahawks at 7 p.m.