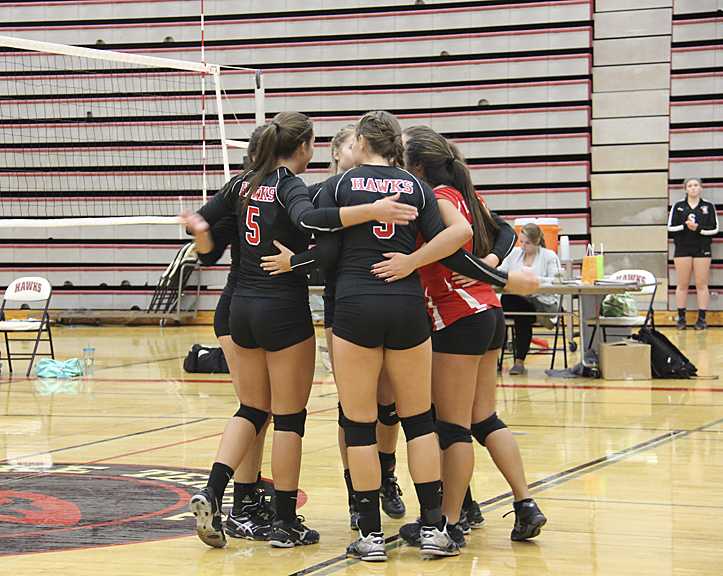 The Hawks huddle to talk about strategy for the next set.

In their first home game of the season, the Hawks fell to the Newport High School Knights. Though the Hawks gave it their all, it just wasn’t enough as the Knights triumphed in an intense showdown resulting in a 3-1 loss.

Coming off of a loss to the Skyline Spartans, the Hawks hoped to reward the home crowd with a win. The Hawks started off well as they narrowly ousted the Knights in the first game, 25-23.

Senior outside-hitter, Nicki Bouche, led the team in their first game by sacrificing her body, diving after countless loose ball and not giving up on any play.

In the second game, the Hawks looked gassed, as they couldn’t find their rhythm, giving up an early 14-5 deficit. The Hawks weren’t able to regain their footing as they went on to lose the second game 25-11, tying the match at 1-1.

In the third game, the Hawks and Knights engaged in a game of spurts as both teams went back and forth at one another. The Hawks were able to edge an early 12-11 lead. However that lead wasn’t kept for long as the Knights, led by junior middle-blocker Avie Neice, regained the lead, 19-20. From there, the Knights were able to go on a run and narrowly come out with a crucial victory of 25-22, making the score 2-1.

Senior outside-hitter and co-captain Alisha Clingan said, “The game was definitely something to be proud of. We were not happy to lose, but we were definitely happy with the way we played.”

Clingan said, “We did get a lot better from our last game versus Skyline, and that’s ultimately what we strive for.”