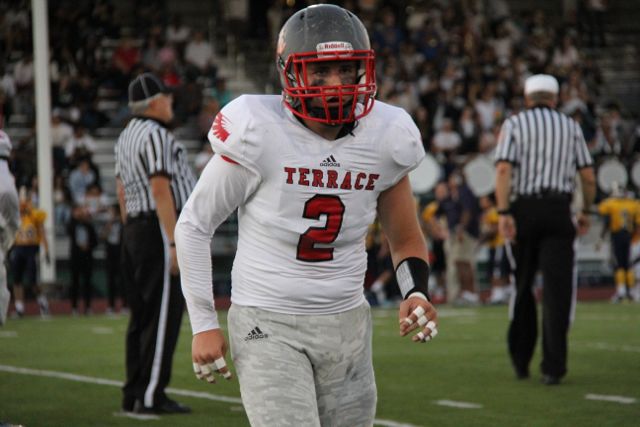 Legendary UCLA Bruins Football Coach Henry Russell Sanders once said “winning isn’t everything. It’s the only thing.” For the first time since 2010, the Hawks hold a 1-0 record after defeating the Mariner Marauders 14-13 on Friday night.

But sometimes winning isn’t everything. Late in the game, MTHS senior Safety Michael Hunt suffered a severe injury following a collision involving another Hawk and Mariner running back. Hunt was driven off the field in an aid car before being transferred to an ambulance.

The injury was a huge blow to morale for the Hawks, despite holding on to a narrow 14-13 lead, though they would hold on late thanks to a stellar defensive stand in the closing minutes of the game, capped off with a huge sack by junior Ilai Wilson forcing a fourth and long situation near midfield for Mariner and ensuring they stay out of field goal range or reasonable fourth down conversion distance.

The story of the Hawks’ offense began and ended for the most part with senior running backs Ryan LaCasse and Malcolm Johnson. LaCasse supplied stellar speed to the outside and made numerous defenders miss, leading to several long runs over 10 yards.

Meanwhile, Johnson pounded Marauders with hard-nosed, downhill, power football up the midde. LaCasse finished with 127 yards on 11 carries along with a 50 yard interception that took away a potential touchdown for Mariner. Johnson added 64 hard earned yards on 14 carries, including both touchdowns for the Hawks.

Regardless, even with the Hawks’ first victory of the season, there remained some feeling of hollow victory with the loss of Michael Hunt. Sometimes, winning really isn’t everything.