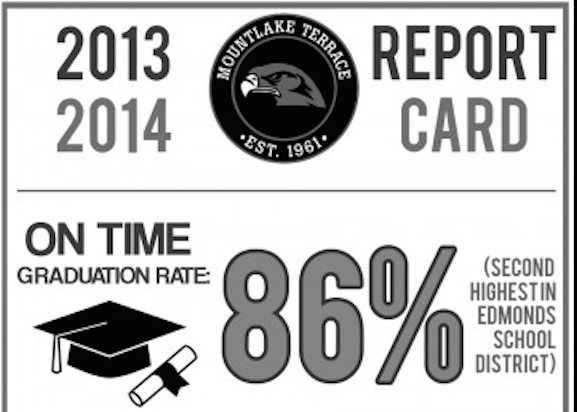 An end to the culminating project could be replaced by more post-high school planning
The class of 2014 was the last to take part in Terrace’s nearly 20 year history of the much celebrated, feared and anticipated culminating project. This past June, the Edmonds School District Board of Directors decided to eliminate the culminating senior project as a graduation requirement for the class of 2015 and beyond.
The decision came after the state legislature decided to remove it as a graduation requirement in light of new mandated standardized testing and a growing number of other graduation requirements.
In early June, Assistant Superintendent Patrick Murphy told the Hawkeye that senior projects helped students develop skills in a variety of areas, including time management, presentation, organization, reflection, goal setting and community involvement.
Principal Greg Schwab said he hopes to preserve the post-high school and college planning aspects of the senior project to make them more “school wide.”

“We’re going to really put emphasis on the college application process, and that’s going to be the way that the elements of senior project are kept alive here,” Schwab said.
Schwab said he wants every student to get the experience of applying for college, including two year colleges or other types of post high school training, citing the need for advanced post high school training in today’s workforce.
“In this day and age you have to have something else, you can’t just stop after high school,” he said.
Assistant Principal Dan Falk said there are conversations happening at the district level regarding ways to keep the skills students gained from the senior project.
“There’s work happening at the district level to create a really comprehensive post high school planning curriculum,” Falk said.
However, Falk said the process of switching from the culminating project to the new plan will take time and possibly additional funding.
Falk said new standards and more testing since the introduction of the culminating project in the mid ‘90s have changed education.
“We can’t keep everything. The system can’t support all of it. I think the kids have been well served by the culminating project and this is a trade-off,” he said.
However, Falk said he will miss what the senior project did for the school culture. He said it won’t be an easy thing to replace.
“I really liked the way that Mountlake Terrace came together for years around the culminating project so that every teacher in the building was a participant in our seniors’ graduation, and it was a way of bringing us together as a school. That’s the one thing that’s not easily replaced. That’ll be missed,” Falk said.
“You don’t just replace that culture. It’s a change and it’s something new. And I’m going to miss that,” Falk added.

Academic Support Period to help students get back on track, pass all of their classes
In response to increasing graduation requirements and a larger need for academic help during school hours, Principal Greg Schwab said a new program called “Academic Support Period” will seek to get students passing all six of their classes.
The decision is largely in response, according to Schwab, to heightening graduation requirements on the horizon. Beginning with the class of 2019, students must pass the “Core 24,” a total of 24 credits to graduate.
That means students must pass all six classes, every year.
“We have to get really intentional about how we can help to make sure students don’t fall behind, because if you fail one class, you’re off track for graduation,” Schwab said.
With the new program, students who are failing one or more classes will be placed on a modified schedule that includes one period of academic support, where students will study and get extra help and tutoring in the recently constructed room within the library.
“One of the things we have been trying to figure out how to do is how to help students when they are struggling academically. We have PASS and we have after-school study club, and those are fine. But we need something during the school day that I think is going to help students,” Schwab said.
So how exactly does Academic Support work? Schwab gave the following example.
“So for example, say there’s a student who’s failing English and math. We’re going to pick a period of the day to put them into Academic Support. So they’re going to stay in the English and math classes to try to stay on track, but then they’re also going to be in an Academic Support class just long enough to get passing their classes again and then they’ll move back up to their regular schedule.”
Academic Support Period will be run by Sue Van Senus, along with Honors Society student tutors. H