Kayla Wheeler: Nothing she can’t do 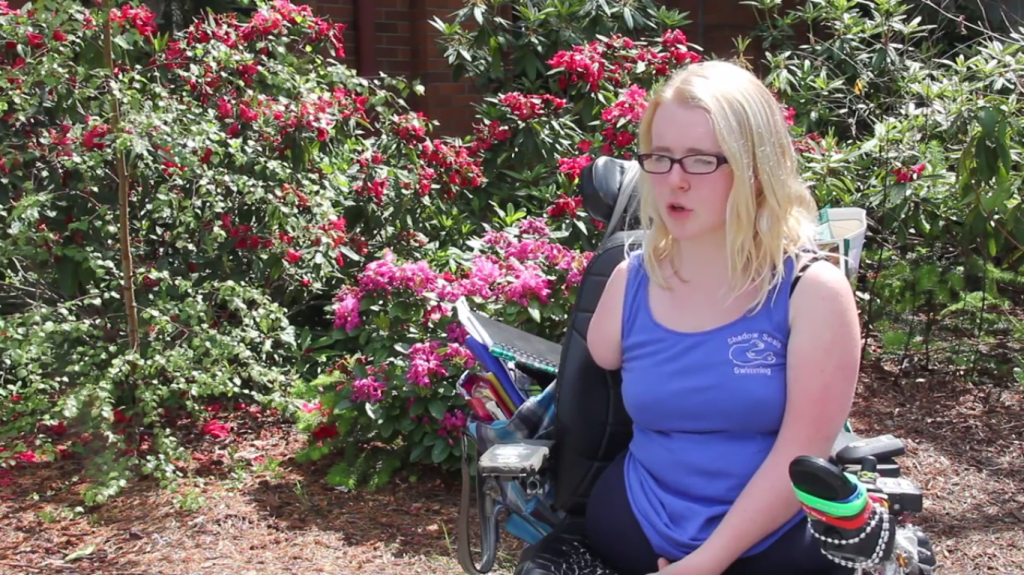 Whether she’s assembling a rocket for rocketry club, delivering a monologue on stage, tinkering with parts for robotics, speaking Spanish to build her fluency, studying for her AP classes or doing laps in the pool, senior Kayla Wheeler is a true Renaissance woman. And she’s doing it despite all odds.

Born a congenital amputee, Wheeler has only one limb, her left arm, which is also malformed. While she can usually be seen moving from class to class in her power chair, Wheeler has proved she is neither confined to her chair nor defined by her condition.

Wheeler’s parents didn’t know about her condition until she was born. The ultrasound nurse mistook Wheeler’s arm for a femur bone.

According to Wheeler, when her parents first saw her, they were shocked. They were expecting a healthy, normal baby. Instead, they now had a child who would seemingly bring endless challenges. However, they quickly came around to become Wheeler’s strongest advocates.

“After that they kind of got over it and realized that I would actually have a somewhat successful life,” she said.

Since then, she has done it all, never backing away from an activity because of her physical disability.

“My mom and dad took on the idea that I can do anything I put my mind to,” she explained. “They didn’t put limits on things that they thought I wouldn’t be able to do because I was missing limbs which was very nice, and I think without that I definitely wouldn’t be where I am today.”

With just one limb, she’s tried skiing, baseball, ballet, jump roping and many more seemingly impossible activities. Where it has seemed undoable, her parents have found a way to make it a possibility.

Kayla’s mother, Joyce, said she has tried to treat Kayla normally and give her the opportunities other kids have. She said it took some innovation, but was well worth it.

“In the early days I did a lot of research…and I found some website and there was a quote on there that said ‘treat them like they’re handicapped and they will be,’ and it stuck with me. I thought ‘you know what they’re right. If I baby her and treat her special, she’s going to be like that,’” Joyce Wheeler said.

Kayla Wheeler has found immense success in the pool. Wheeler holds four world records and 39 national records for Paralympic swimming. Watching her swim is truly a sight to see. With her coach Kiko VanZandt poolside shouting for her to push onward, Wheeler propels herself across the lane using just her one limb.

Since 2007, VanZandt has coached Wheeler to success, and said watching Wheeler grow has been “remarkable.”

“She’s a really great young lady. She knows what she wants and she kind goes after it,” VanZandt said.

VanZandt called Wheeler a “pioneer,” due to the fact that she’s in a rare classification with few swimmers globally. Because there are so few swimmers like Wheeler, there won’t be any events Wheeler can participate in at the 2016 Paralympics in Rio de Janeiro.

“So as a pioneer, my hope is that she’s getting out there and racing more on the international scene, that the international Paralympic committee will realize that they need to add some events for her class for 2020 in Tokyo. So we’re shooting for 2020,” VanZandt said.

She’s traveled to Guadalajara, Mexico and to the Netherlands, Brazil, Canada and across the United States, competing against other disabled swimmers from around the country and around the world.

Her relentless training and dedication to the sport have made her a powerhouse in the pool. VanZandt put it simply saying, “She’s the best.”

Joyce Wheeler said it has been amazing to watch her daughter achieve her goals.

“It’s not even so much about the medals. All that’s very cool too, but it’s seeing her reach her goals. Those moments are amazing,” she said.

As Wheeler is moving on to the next chapter in her life, she has set forth on a path toward helping others.

After Wheeler saw how her friend at a different school was treated because of her disability, Wheeler knew she wanted to become an advocate for the rights of disabled people.

“My best friend who’s also in a chair part-time, had surgery on her feet and was confined to her wheelchair for a couple of months. Her school just treated her horribly. They didn’t give her any of the accommodations she needed. They tried to run her through gravel paths in a manual wheelchair… she’s like ‘no, I need to go on the cement,’ and they told her ‘you don’t know what you need,’” Wheeler said.

“I really didn’t like that, so I want to be able to help people who are in situations like that,” Wheeler said.

Wheeler’s condition has given her a unique perspective when it comes to others.

“[My disability] made me less likely to judge people. I know everyone is different but I’m not sure I would have gotten that message otherwise. It’s really hard to speculate as to what kind of person I would be if I had all my limbs, but at the same time I feel like it probably did help and has helped me want to help people more.”

She added, “I received so much help in my life from other people because I need help and I want to give back to people. I don’t know if I would have necessarily had the same mind set if I hadn’t needed all the help when I was younger.”

Turning to her future aspirations, Wheeler plans to double major in psychology and Spanish at the University of Washington, where she was accepted earlier this spring.

She plans to pursue law school after earning her bachelor’s degree. Wheeler’s ultimate goal is to become a disability rights lawyer, advocating for children and adults who need a strong voice defending their rights. A strong, confident voice like hers.

With her sights set beyond high school, Wheeler hopes to break down some of the negative stereotypes surrounding people with disabilities.

“People assume that you’re not really going to go anywhere in life…that’s really not true. Some things might be harder, sure, but you’re still going to have a life,” she said.

Wheeler said many also believe that all disabilities are cognitive as well. Which again, is not true.

“I’ve had subs at the school who talk to me like I’m two. They talk really slowly and annunciate every syllable. Even if I’m in an AP class,” she said.

But even with the occasional display of ignorance, Wheeler said MTHS is very accommodating and accepting of her and of other people with disabilities. She has had tremendous support from administrators and teachers.

Wheeler has made special connections with a few specific teachers.

One of them is jewelry and metal design teacher Mark Walker, who has first-hand experience with disabilities.

Walker understood challenges and offered to advocate on Wheeler’s behalf had she encountered any problems with teachers because of her disability.

Wheeler said she also bonded with teachers Nancy Paine, who helped her get over a rough breakup, and James Wilson, who jokes and talks philosophically with her.

As she moves onto the next chapter of her life, Wheeler vows to keep doing what she loves.

Wheeler is thinking along the lines of bungee jumping and skydiving.