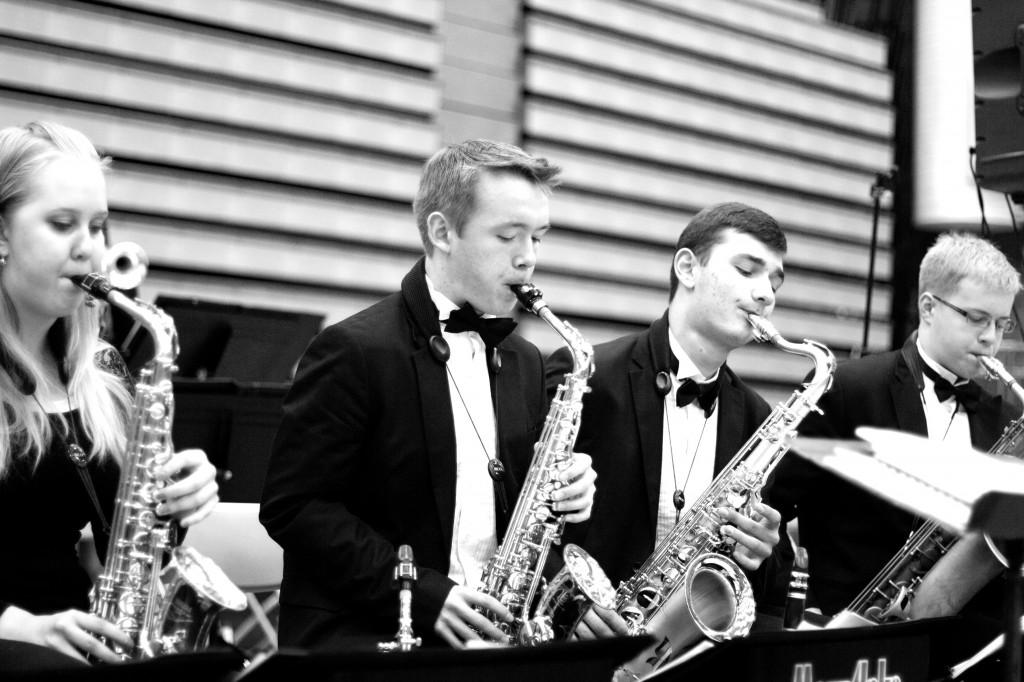 Senior Chris Ryder improvises on his alto saxophone during the Jazz Ensemble 1’s performance at the arts assembly in the Terraceum on May 23.

A multitalented, multidimensional artist, Chris Ryder has found his home on the stage, creating stunning performances for all types of audiences.

Ryder is most commonly known for the sweet sounds of his jazz sax.

He started his jazz career back in eighth grade where he first picked up a saxophone at Brier Terrace Middle School. He moved onto Jazz 2 his freshman year but wasn’t really into jazz until halfway through his freshman year.

“I went to a festival down in Vancouver at Clark College and I saw our Jazz 1 get second place and a couple of guys get solo awards. That got me going and inspired me to start taking private lessons and really practicing,” he said.

However, Ryder said his biggest inspiration has been his brother.

“He’s an actor and he’s never been super successful, but he has always stuck at it and has always been trying to get better at his craft and when I see him stick at it, [he] has really inspired me,” he said.

He also plays the soprano saxophone, tenor saxophone, and clarinet. Ryder said he has enjoyed his time as a member of the various bands at MTHS. Ryder’s passion for jazz as taken him to many places such as Portland, Disneyland, Georgia, and also New York.

“I’ve met lots and lots of people, made tons of friends and have had a lot of great and unique experiences through this program,” he said.

Ryder fell in love with New York during his participation in one of the nation’s most prestigious jazz competitions, Essentially Ellington, where Jazz Ensemble 1 placed sixth. Ryder also added that it was one of his most proud accomplishments including making All-State Jazz band for Washington state.

Ryder said he enjoyed jamming out with the Big Apple as the backdrop.

“Probably my favorite experience there was the jam session they had with all the students from all the schools at night in the Allen room, which is a big room they had overlooking Columbus Circle and the back wall is completely glass so you can see New York City change from day to night while you’re jamming,” Ryder noted.

He has not only showcased his talent in jazz in school related events but has also done various performances and gigs outside of school.

“I played many pieces last summer at Anthony’s [restaurant in Edmonds], and one really fancy gig not too long ago downtown that Cisco Morris from KING-5 hosted”

Ryder’s talent does not stop at jazz. He can also be found singing with the Dynamics jazz choir or rehearsing for theatre sports.

Ryder plans to continue playing music after high school, and finish up his associates degree at Edmonds Community College then to transfer to major in communications and minor in music. Ryder said his experience in high school taught him the importance of perseverance and dedication.

“Always try your hardest and always fully engage and put yourself into something 100 percent because the reward is greater than the risk. Always try your best and not be afraid to fail,” he said. Η