May 2014 students of the month 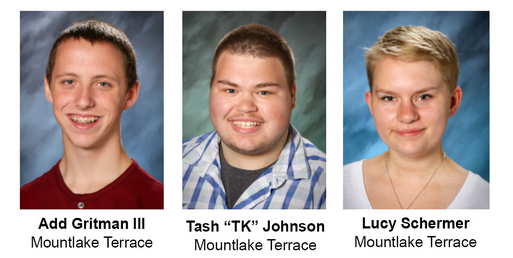 The Edmonds School District selects two students each month to each of the high schools to recognize their accomplishments and achievements. Go to the ESD website for the complete list and information for the May 2014 students of the month.

Student Name: Lucy Schermer
Mother’s Name: Margaret Schermer
Father’s Name: Steve Schermer
GPA: 2.97
Clubs & Activities: Chamber Winds, Jazz Ensemble 1
Awards: In 2012 I won the Seattle Symphony Young Artist competition and got to solo with them in February of 2013. I received first place in the flute division of the Washington State Solo Contest in 2012 and 2014. I also received first place in the Horsfall Flute Competition in the junior division in 2011; honorable mention in the senior division in 2012; third place in 2013; and first place in 2014. As a member of the MTHS Chamber Winds, I have lettered every year as well as received most improved in 2011, most outstanding in 2012, and most outstanding in 2013. I received an $8,000 academic scholarship and a $14,000 scholarship from Duquesne University. I also received the Cascade Symphony’s Robert Anderson scholarship for $2,500.
Culminating Project: I did a senior flute recital with proceeds going to the MTHS Band program.
Current Employment: I am a freelance musician and a private flute instructor.
Future Educational Goals: Next year I will attend Duquesne University in Pittsburgh and major in music performance.

Student Name: Tash “TK” Johnson
Mother’s Name: Kimberly Johnson
GPA: 2.7
Clubs & Activities: Hawkeye; Hawk Broadcasting Network (HBN)
Athletics: Four years of bowling; Two years of football; two years, track and field
Awards: 2011 Humanities Film Festival – Freshman Category Winner “The Killer;”
2013 Humanities Film Festival – Open Category Winner “The Killer 2;” 2014 WJEA – Excellence in Sports Photography
Culminating Project: Script Writing for a Short Film
Current Employment: Intern for MLTNews; Video Producer for Seattle Stallions (semi-pro football team).
Future Educational Goals: Study Film & Photography at Shoreline Community College
Future Career Goals: Film director and/or producer; sports photographer; photojournalist; sports broadcaster
Anything else we should know? There were three teachers who helped me a lot during my time at Mountlake Terrace High. The first is Vince DeMiero, who was almost like a stepdad to me and is also a great teacher. The second is Angelo Comeaux, who kept me in HBN, where my enjoyment for sports broadcasting started. Finally, Steve Merlino has been another person to give me feedback on my films since junior year. I wish I’d known each of them going into high school, because I would have been a better student and person. Finally, there’s my mom, who’s been both my parents basically my whole life. She’s been there for me when I need her and is the most unselfish person I know.