Friends, family gather to celebrate the life of Forest Jackson 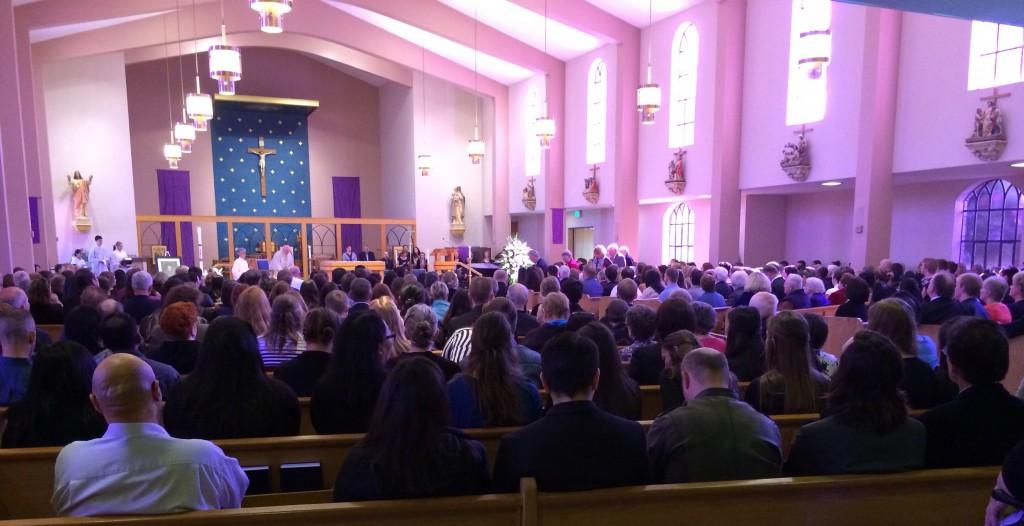 Family, friends and members of the MTHS community gathered at St. Catherine of Sienna Catholic Church in north Seattle this morning to celebrate the life of 2011 graduate Forest Jackson.

Jackson, 20, was killed on March 29 at his residence in Mountlake Terrace.

The Mass, open to the public, drew a capacity crowd in the Roosevelt-area parish. As pews quickly filled up, many stood around the church’s perimeter to take part in the celebration.

The Mass included members of Jackson’s family and friends taking part in the readings and other key parts of the service, including his aunt Cathy. Earlier in the week, she said that Forest, “[was] the sweetest boy who grew into a silly, kind and loving young man. He had such compassion for others, he felt empathy for those who faced struggles in their lives and didn’t have it easy, and he had a heart so huge that he reached out to the very person who would harm him.”

“His smile was beautiful and his laugh was contagious. I could not be more proud of him, and miss him from the bottom of my heart,” she said.

Just prior to the end of the Mass, several family members and friends shared their memories of Forest. Speakers included his mother, Cathy, and his sister, Micha, who is a senior at MTHS.

Both shared early memories of Forest’s childhood, bringing both tears and laughter to those gathered in the sunlit nave.

Many of the speakers alluded to Forest’s musical talent and passion. Other speakers included his uncle and fellow classmate Ira Wahlmeier. Sweet sounds of jazz were played before and after the service – including live recordings of Forest performing with Jazz Ensemble 1.

After the service concluded, the attendees were invited to a reception for refreshments and reminiscence. Members of the 2011 Jazz Ensemble 1 performed at the reception, filling the room with the sounds of jazz. Jackson was a member of the 2011 Jazz Ensemble 1 group and an award-winning saxophonist. He received an outstanding soloist award at the 2011 Essentially Ellington Jazz Festival in New York.

Forest was baptized at St. Catherine of Sienna Church – the parish where his grandparents had been attending for more than 50 years.